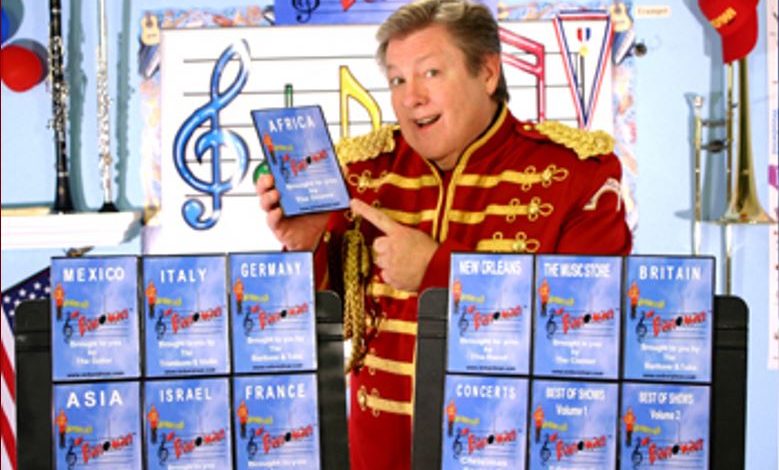 Come on a magical journey to Africa! Mr. Bandman will sing his song that places emphasis on the alphabet and then relates how the alphabet letters A thru G are used in music. Then we are entertained as animals play musical instruments. African Drumbeats, Melodies, and Beautiful Harmonies are included as an integral part of African history. The sweet potato is one of Africa’s food contributions to the world.
TEKS: Language Arts K.1F,K.7A/B, K.13A/B; Science K.8A
Music 1.A/B, 3.B

We learn the colors of the United States Flag – red, white, and blue; and
also how to spell red, white, and blue. On our adventure we see the
similarities between the colors of the American flag and the Mexican flag,
red, white, and green. Mr. Bandman hears the children saying “hello” in
different languages and sings, “When we wave our hands in the air, it’s hello that we share. We’re all one race the human race and we all say hello.”
The Video Adventure Machine has taken Mr. Bandman to festival time in
Mexico and he hears the Guitar and the Latin Percussion instrument the Maraca, eats a tasty chicken quesadilla.
TEKS: Language Arts K.1F, K.2A/B, K.7A/B, K.8C, K.13A/B
Social Studies K.10A, K.11B; Art K.1B; Music 1.B, 3.B

Mr. Bandman gives the children a big TV hug. He then sings about respect, patience and responsibility all the time highlighting good character and good citizenship. The Trumpet and Harp are introduced as important instruments to this country. Do you think Mr. Bandman will ride a camel? NOT!!!
TEKS: Language Arts K.1F,K.13A; Social Studies K.10, K.11B
Health K.8, K.9; Music 1.B, 3.B

Join Mr. Bandman as he travels to Italy in his Video Adventure Machine!
Calendar skills will be emphasized along with your very special calendar
day, your birthday! The Violin and Trombone are introduced. Pizza is the food originating from the Italian culture. Mr. Bandman loves Pizza!
TEKS: Language Arts K.1F, K.13A; Social Studies K.11B; Math K.11D Music 1.B, 3.B

Similarities and differences are explored through the shapes of faces and
the sizes of people between Asia and America. Mr. Bandman tells us about the many countries that enjoy kite flying and a special American Benjamin Franklin. Then watch as Mr. Bandman’s band members fly their kites. The Bawoo (Flute) and Yangin (String Instrument) will be introduced as important instruments from this culture. Mr. Bandman will compare the similarities and differences of how chicken is used in this culture as well as other cultures.
TEKS: Language Arts K.1F,K.13A; Social Studies K.11A, B
Music 1.B, 3.B

Travel with Mr. Bandman to the music store and learn about several different woodwind instruments. Mr. B will associate instruments with the first letter of the alphabet they begin with. You’ll also get to see high school students playing various Musical Instruments from the Woodwind Family. Character education is discussed as Mr. Bandman talks about trusting students with instruments.
TEKS: Language Arts K.1F, K.7A; Music 1.A/B

Show 7: Great Britain – Musical Instruments from the Brass Family; The Trumpet, the Trombone and the Tuba.

First the children will learn how to spell BRITAIN, learn about the Tuba and return to the Music Store to explore the wonderful sounds of three brass instruments from the Brass Family, The Trumpet, the Trombone and the Tuba. On the British Isles we’ll visit the country of England. On this journey the children will hear the bells at the clock tower called Big Ben and Mr. Bandman will sing a song about the tuba.

Then while in England we’ll watch the Grenadier Royal Marching Band in action at Buckingham Palace at the changing of the guard ceremony.
Enjoy a snack of English fish and chips with Mr. B! Can you find him in the marching band?
TEKS: Social Studies K.1F,K.11B; Music 1.B, 3.B

Watch and see where Mr. Bandman lands the Video Adventure Machine as we explore how high the Eiffel Tower is. Also learn how different instruments sound high. He might even play The Saxophone, the instrument given to us by the same people that gave us French Fries. Maybe Mr. Bandman will taste some real French Fries!
TEKS: Social Studies K.1F, K.2A, K.10.A, K.11B; Music 1.B, 3.B

Join Mr. Bandman as he supports the classroom skills of practicing
counting numbers 1-10 and then relates how numbers are important to music.
The musical style known as jazz originates from this region and the name jazz came from a popular perfume called Jasmine. We even get to hear Mr. Bandman play his saxophone with the Galen Jeter Jazz Band.
TEKS: Language Arts K.1.F, K.4A, K.13A; Math K.6B; Social Studies K.11B, K.12; Music 1.B, 3.B

The Video Adventure Machine lands at a German festival. Then we learn about different styles of music and learn how to spell GERMANY. You’ll also learn more about the Trombone and laugh out loud as you listen to Mr. Bandman Yodel.
Then you’ll visit the remains of the Berlin Wall and listen to an outstanding song about “FREEDOM”.
Also we listen to the music of the composer Mozart. While there you’ll
get to sample yummy foods such as German frankfurters or knockwurst and German potato salad.
TEKS: Language Arts K.1F; Social Studies K.11B; Music 1.B, 3.B